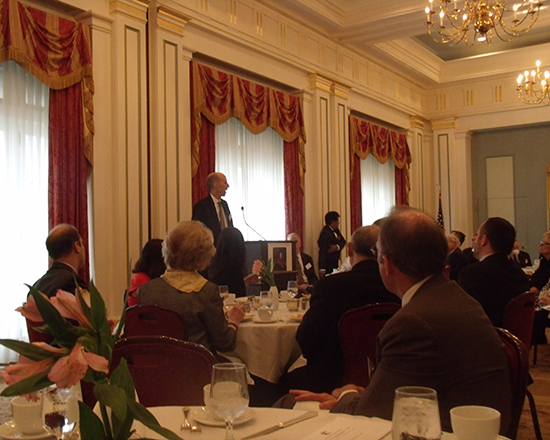 Ed Whelan addressed the Society at a luncheon at the Army Navy Club in DC. He provided an insightful analysis of the effects of the recent Supreme Court decision to let stand appeals court rulings allowing same-sex marriage in five states, and he presented an update regarding the religious liberty cases pending before the Court. Since the Supreme Court’s refusal to take the appeal dealt a major blow to the legal defense of traditional marriage, Whelan aptly reminded the Society of the words displayed on our website of the early 20th Century English writer, G.K. Chesterton, who in 1919 presciently wrote, “Sir Thomas More is more important at any moment since his death (in 1535), but he is not quite so important as he will be in a hundred years’ time.” 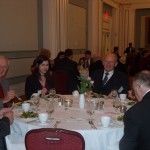 In reaction to Mr. Whelan’s remarks, Stu Nolan, Society Member and managing attorney at LegalWorks Apostolate, PLLC, wrote as follows: “Over the years, I have seen Ed at numerous events and heard him speak many times with great clarity and insight regarding all things jurisprudential. And of course I follow closely his prolific written contributions to National Review Online at the website’s ‘Bench Memos’. But, Ed reserved for the Thomas More Society, and in particular with reference to St. Thomas More himself, the most emotional appeal I have ever witnessed from him. His passionate plea for prayers for the conversion of those who are doing such manifest damage to the legal landscape, indeed such great harm to our culture and to our liberty, was even more compelling than the sound analysis to which all who are acquainted with Ed have grown well accustomed.’”