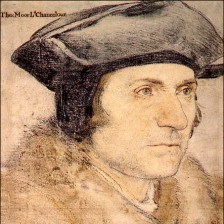 Thomas More personified an informed conscience, which after weighing all factors decides the best course, despite the cost. His trial – one of the great moments of human history – was a landmark in the development of English law. It is no wonder that Thomas More has been voted by the British Bar to be the greatest lawyer of the millennium. His stand-off has been called “a perpetual glorification of human freedom.” At issue was a point of conscience in which he felt the whole of his integrity – his very salvation – was at stake.

More held that while parliament might dispose of the crown and hence of the succession, it could not dispose of the headship of the church, a thing spiritual and international. And so the tragedy was staged: pressure to accept the new order, the king’s fury, the rigged trial, and condemnation on a charge based on perjured evidence – all led toward an inexorable denouement.

More is lauded for dissenting in matters of conscience. But conscience, to him had
far greater dimensions than the right to dissent. To him, conscience is based not in
glorious isolation but on an informed relation to God and His Church consisting of the
communion of saints: past, present and future. More was asked to take an oath he did not
believe in and thereby perjure himself; by these standards this he would not do.

More’s focus on unity and order in his writings, the constant assertion of the moral law above the considerations of power, the loyalties of the international Christian humanist community, and the cosmopolitanism of faith and culture help us appreciate his final words:

I die the king’s faithful servant, and God’s first.