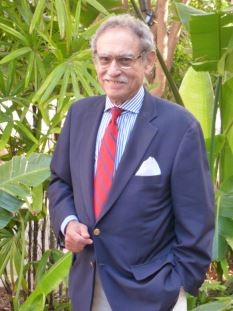 The Thomas More Society of America

Cordially invites you to attend a luncheon presentation

Can the Political Branches Counter the Courts on Marriage and Abortion?:

Teaching the Conservatives Again What They Once Used to Know

Read more about Dr. Arkes and this invitation clicking here or keep scrolling to the bottom of this post (you may have to click “Read More”).

Update: RSVP window has closed. We look forward to seeing you on Tuesday, October 27!

Hadley Arkes has been a member of the Amherst College faculty since 1966. He was the William Nelson Cromwell Professor of Jurisprudence, and was appointed, in 1987, as the Edward Ney Professor of American Institutions. He has written five books with Princeton University press: Bureaucracy, the Marshall Plan, and the National Interest (1972), The Philosopher in the City (1981), First Things (1986), Beyond the Constitution (1990), and The Return of George Sutherland (1994). But his most recent books have been with Cambridge University Press, including Natural Rights and the Right to Choose (2002), and Constitutional Illusions & Anchoring Truths: The Touchstone of the Natural Law (2010). His articles have appeared in professional journals, but apart from more scholarly formats, he has become known to a wider audience through his writings in the Wall Street Journal, Washington Post, Weekly Standard, and National Review. Professor Arkes has been a contributor, also, to First Things, a journal that took its name from his book of that title. For eight years he wrote a column for Crisis magazine under the title of “Lifewatch,” and he has carried over that concern as one of the band of friends who formed the web journal The Catholic Thing.

He was the main advocate, and architect, of the bill that became known as the Born-Alive Infants’ Protection Act. The account of his experience, in moving the bill through Congress, is contained as an epilogue or memoir in his book, Natural Rights & the Right to Choose. Arkes first prepared his proposal as part of the debating kit assembled for the first George Bush in 1988. The purpose of that proposal was to offer the “most modest first step” of all in legislating on abortion, and opening a conversation even with people who called themselves “pro-choice.” Professor Arkes proposed to begin simply by preserving the life of a child who survived an abortion—contrary to the holding of one federal judge, that such a child was not protected by the laws. Professor Arkes led the testimony on the bill before the Judiciary Committee of the U.S. House in July 2000, then again in July 2001. The legislative calendar was upended in the aftermath of September 11, but in March 2002, the bill was brought to the floor of the House, where it passed unanimously. To the surprise of Professor Arkes, the bill was brought to the floor of the Senate and passed in the same way on July 18. On August 5, President Bush signed the bill into law in a ceremony in Pittsburgh, with Professor Arkes in attendance.

Professor Arkes has been the founder, at Amherst, of the Committee for the American Founding, a group of alumni and students seeking to preserve, at Amherst, the doctrines of “natural rights” taught by the American Founders and Lincoln. And more recently he has been asked to lead a new project or Center for the Jurisprudence of Natural Law under the sponsorship of the Claremont Institute. He will head the Washington office, with Michael Uhlmann in California and John Eastman—everywhere. The purpose of this new Center is to teach anew those principles of law that furnished the guide to the American Founders as they set about framing a Constitution. The purpose is to restore, to a new generation, the furnishings of mind of the men who formed this regime.